Company  members are selected by invitation. The faculty looks for dancers that show  strong technique in modern, ballet and pointe. Dancers that are invited to  dance at the elite level in these disciplines, and that show a commitment to  class attendance and rehearsals will be considered. 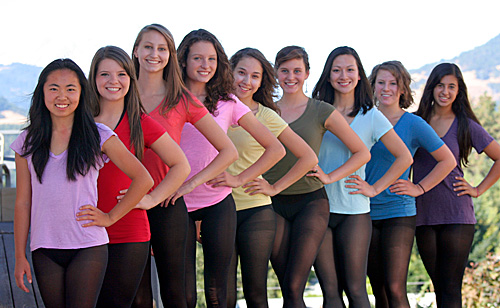 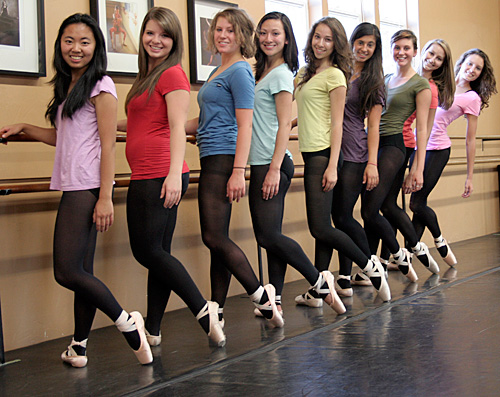 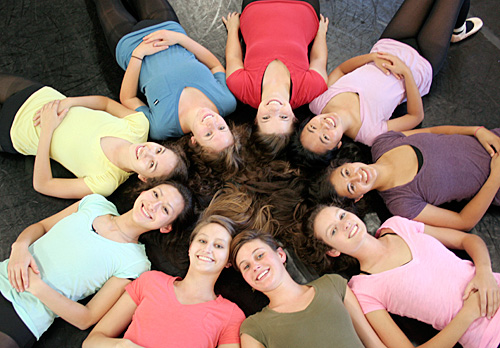 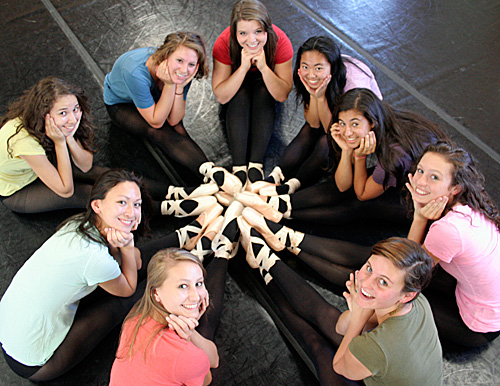 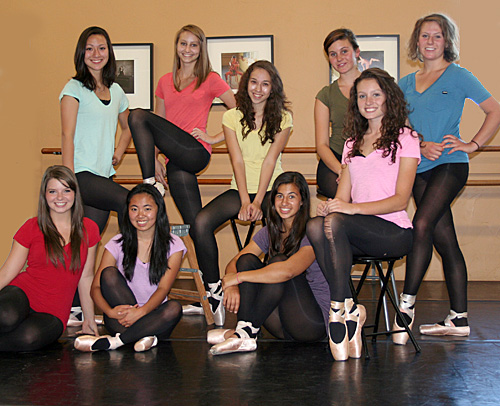 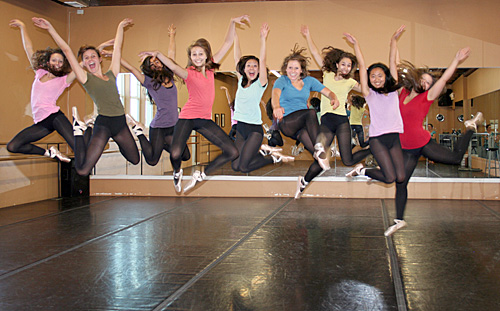 Skye is 18 years old and is a senior at Hood River Valley High School. She began dancing at the age of 2 and has danced at CGDA for nine years. Spending every night of the week at the Academy, she has found a family and home within the company as well as friends in her classes. She enjoys taking ballet, pointe, jazz, modern, hip-hop, and contemporary classes and is always looking to expand her knowledge. Over the summer, she has taken part in dance camps at Columbia Dance in Vancouver, Washinton and Whitman College in Walla Walla. Her favorite aspect of dance is performing in front of an audience. She wants to share her passion of the art and help others fall in love with it too. Performing the roles of Clara, Doll, Arabian, and Merliton in The Nutcracker are among some of her favorite experiences.
Outside of dance, Skye plays varsity soccer at HRV, is a leader on the school’s ASB, sings in the school Chamber Singers, is a part of many clubs, and keeps a part time job at Brian’s Pourhouse. She credits her love of dance to her mom and dad who have been her greatest encouragement and inspiration throughout the years. After high school, Skye wants to go to college, study abroad in Spain, become fluent in Spanish, and find passion in every day. Wherever she goes, dance, music, and art will always be a huge part of her life.
———————————————————————————————————————————

Megan is a 17-year-old junior at Horizon. Dance has been a big part of her life since starting at CGDA when she was 5-years-old. She began with tap, then added ballet in fifth grade and has loved it ever since. She later added jazz her sixth grade year, and modern last year. Over the years she has attended summer intensives here at CGDA, and this past summer went to Columbia Dance in Vancouver. Aside from taking classes at CGDA during the week, she is also taking the company class at Columbia Dance every Saturday. Besides the amazing teachers here, she has been lucky enough to dance with Dario and Gisele Mejia, Jan Hurst, Mark Bourchault, Joseph Wyatt, and many more. She loves performing, enjoys learning new genres of dance, and studying under different teachers!
Megan loves dancing at CGDA and is so thankful for all the wonderful teachers and her fellow dancers. All the instructors are so enthusiastic and inspiring and have contributed to her growth as a dancer. This is Megan’s second year in the company and she is very grateful for the experience. She is looking forward to this year and knows it will be great!
———————————————————————————————————————————

Dominique is a junior at Columbia High School in White Salmon, WA. Dominique has been dancing since the age of four when she first enrolled at CGDA. She’s been taking ballet ever since and has done jazz and modern the past few years. Dominique’s always up for trying new styles of dance any chance she gets.
Dominique went to the summer dance intensive at Columbia Dance Academy in Vancouver from 2007-2009 and went to Whitman College for the Summer Dance Lab in 2010 and 2011. She also takes the Company Class on Saturdays at Columbia Dance. In addition to her wonderful instructors at CGDA, Dominique has studied under Jan Hurst, Haruna Yamazaki in Tokyo, Naomi Mason, and Melissa Vovou just to name a few.
The CGDA studio has become her second home, and all the teachers here have become her second family. Dominique is very grateful for all the warm help and support she receives from her instructors. She’d like to thank all of them for inspiring her and helping her reach her goals in dance. This is her first year with the CGDA Company and she plans on it being a great one!
———————————————————————————————————————————

Sophie is a seventeen year old senior at Hood River Valley High school and loves dancing at CGDA, where she began at the age of four and took her first ballet class. She left ballet the next year and took up jazz, but returned to it in the fourth grade. Last year, she added modern to her schedule, and has fallen in love with it along with ballet en pointe. She loves each minute spent dancing, and is so grateful to have the wonderful teacher who have nurtured her passion. Whatever happens to her outside of CGDA, when she comes to class, all her stress evaporates, and she goes home happier than before. Her teachers and fellow dancers are like a family to her, and being around always lifts her spirits.
She has taken summer intensives at CGDA and Columbia Dance in Vancouver, and had a fantastic time learning at both. Outside of dance, Sophie participates on HRV Girl’s Varsity Tennis, Nordic Ski Team, Chamber Singers, and the school musical. She also takes part in a variety of clubs and works at Mike’s Ice Cream. In her spare time, she loves to road bike, read, and eat. In the future, she wants to take classes for pre-med, dance, and french so she can travel to France and join ‘Medecin Sans Frontiers’, which is the original ‘Doctors Without Borders’.
Before she gets too serious though, she wants to keep dancing and performing as much as possible while her body will still allow it. Sophie thoroughly enjoys Company, and is honored to be a part of it.
———————————————————————————————————————————

Gracen Gracen’s grandfather enrolled her in her first class at Columbia Gorge Dance Academy when she was three years old. Since then, she has always found a way to incorporate dance into her life, and is most interested in ballet and modern. Upon graduation, she plans to continue to dance for enjoyment and overall wellness.
She finds the arts to be a place of peace and a haven when feeling troubled. For Gracen, dance is one of the healthiest and most enlightening forms of self-expression and is truly an activity of mind, body, and spirit.
———————————————————————————————————————————

Shantaé is 17 years old and a senior in high school. She has been dancing since she was three years old, making this her 14th year taking classes. She began dance in The Dalles taking tap and tumbling, and soon after began competing with her group there. She also took tap in Hood River when she was 4. Since then she has taken up Jazz, Hip-Hop, Modern, and Ballet.
This is her second year dancing for the CGDA Company and she feels so honored and grateful for the opportunity.
After she graduates, Shantae hopes to pursue a career in medicine, and continue dancing wherever she is!
———————————————————————————————————————————

Daisy is a 17 year old senior at Hood River Valley High School. She began dancing at the age of eight and has enjoyed every moment of it. She started off with ballet, then later added hip hop, jazz, and modern. She has participated in the Nutcracker every year since she’s been there, and achieved roles like Clara and the Chinese Soloist.
Outside of the dance academy, she enjoys being a part of the school’s musicals and plays. She enjoys singing and playing instruments as her pastime. This summer, she participated in the Summer Ballet Camp. She has danced under the instruction of Joseph Wyatt, Melissa Vovou, Vladimir, Dario, and Giselle Mejia. She is incredibly grateful for having wonderful instructors who helped her make it this far and for giving her the opportunity of being in company.
———————————————————————————————————————————

Mikayla is a sixteen year-old junior at Hood River Valley High School. She has been dancing at CGDA for 12 years starting with ballet at the age of 4. Later she started taking tap and jazz classes, but dropped tap to take hip hop. Currently Mikayla takes multiple ballet classes, jazz, hip hop, and modern. She dances 5 days a week at CGDA and enjoys every moment of it.
When Mikayla isn’t dancing, she spends her free time playing the piano and learning Mandarin Chinese. She also works hard in school to maintain her 4.0 GPA. She brings her passion of learning to CGDA so she can experience new dances of various styles to add to her repertoire.
Mikayla is very thankful for the all the wonderful teachers here at CGDA who have helped her to develop as a dancer over the past years. She has also been lucky enough to have danced with Joseph Wyatt, Jan Hurst, Giselle and Dario Mejia, and many other dance instructors whom have also helped her to improve her dancing technique. This is Mikayla’s first year in company. She is excited for a great year and is very appreciative for the opportunity!
———————————————————————————————————————————

Meredith is a seventeen-year-old senior at Hood River Valley High School. She has been dancing with the Columbia Gorge Dance Academy since she was 4 years old. She is currently taking hip hop, modern, and ballet classes, and spends every week night at the studio. Over the past years, she has participated in summer intensives at CGDA.
Outside of dancing, she enjoys playing soccer, riding horses, and hanging out with friends. She would like to thank all her wonderful teachers for giving her the opportunity to be a member of the company this year.
———————————————————————————————————————————
Company Archives

This error message is only visible to WordPress admins

Please go to the Instagram Feed settings page to create a feed.

2600 May Avenue Hood River, OR 97031
Email Us
columbiagorgedanceacademy.com